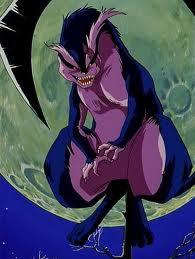 Juro is a Kamaitaichi and the middle brother of Raishin and his younger sister Kagari. Originally, they were a classic trio of Kamaitachi siblings, Raishin knocking down humans, Juro giving the humans a cut, and Kagari applying medicine. Juro loved nature and was originally a gentle yokai but because he and his siblings were frequently forced away from their homes by humans, Juro grew hateful of humans in general, and his hate made his sickle sharper and stronger and bloodthirsty.

He went on killing sprees on humans simply because he hated them all, and his bloodlusts were so severe his own siblings asked Ushio Aotsuki, the wielder of the Beast Spear, to kill him. Juro fought Ushio and his companion Tora, but they soon found themselves in a dangerous situation where Ushio and Tora were holding up a large rock to keep it from crushing Juro's siblings who were pinned by a tractor. When Ushio shed sincere tears for Juro he was so moved and shocked a human could relate to his heartache.

When the situation was resolved, Ushio offered to help Juro and his siblings find a place to call home where humans would never find them. At first, Juro thought it was a wonderful idea but, without warning, attacked Ushio who instinctively killed Juro in self-defense with the Beast Spear, impaling the sickle-wesel. With his dying breath, Juro thanked Ushio for showing him kindness and compassion and telling his brother and sister not to cry and never lower their human disguises, for such a place that they could call home and never be bothered by humans did not exist, and he died in peace.

Community content is available under CC-BY-SA unless otherwise noted.
Advertisement